THIS DUO IS CATERING TO AN IGNORED MARKET IN THE FASHION INDUSTRY.

While the fashion industry is making positive strides to incorporate inclusive solutions, there are still communities that are left out of that conversation. And when body positivity spearheads the dialogue, men are hardly discussed. To bring light to a highly-ignored topic, MVP Collections provides pieces for the big and tall guy to still participate in some of the hottest fashion trends.

“I’m a big and tall customer. I started this brand for the simple fact that there were no stylish options for the big and tall guys,” said Mo Vaughn, MVP Collections Founder. Vaughn, who has worked closely with his business partners Diane Bennett and Frank Thomas, has taken the mission of MVP and implemented their clothes into 20 + DXL stores worldwide and just introduced their denim to the Nordstrom customer. The brand’s size range is from 2XL-6XL and from 40-58 offered in 32”, 34” and 36” inseams. The retail price also sits at about $59- $208.

Read the full article at essence.com Despite the life portrayed by all the beautiful people you follow on Instagram, not all of us are flexing our biceps on the Mediterranean, flaunting our abs in the Hamptons, or brandishing our sleek, tanned bodies on a beach this summer. In fact, a study by the Centers for Disease Control released at the end of 2018 shows that “mean weight, waist circumference, and BMI (body mass index) in adults have increased over the past 18 years. Conversely, mean height did not change in many demographic subgroups and, in some groups, was lower.”

The good news is that a growing faction of the men’s apparel industry is churning out clothes that look good on larger frames while still keeping up with current trends. In the past few years, it’s even recognized that there’s a difference between “big” and “tall,” treating clothing proportions differently and appropriately.

MVP Collections was founded by a literal MVP, Mo Vaughn, former three-time Major League Baseball All-Star, who won the 1995 Most Valuable Player award when he was with the Boston Red Sox. This minimalistic Crystal White sweatshirt is made from luxurious 100 percent cotton French Terry. Keep it clean, pairing with white denim, or let it be the balance to something a little more colorful like the brand’s destruct wash moto shorts.

read the full article at The Manual

Two former American League MVPs, both large men themselves, have joined forces in a new venture designed to fill that void.

Hall of Famer Frank Thomas, winner of successive MVP trophies while playing for the Chicago White Sox, and Mo Vaughn, who spent most of his career with the Boston Red Sox, are now teammates in retail.

“I started the brand three years ago,” Vaughn told Forbes in an exclusive interview. “I was looking around for different products, different styles, and found nothing there. With me, because I’m a former professional athlete with a nice income, having stuff made was easy. But there really was no style for the big and tall guy.”

The brand, called MVP Collections, launched in August 2016 and found immediate success in the men’s fashion industry. The original founders were Vaughn and fashion industry veteran Diane Cutuli Bennett. Thomas, a friend of Vaughn’s since their college days, became a partner on May 29 of this year.

read the full article at Forbes.com

The former All-Star rivals have teamed up on MVP Collections 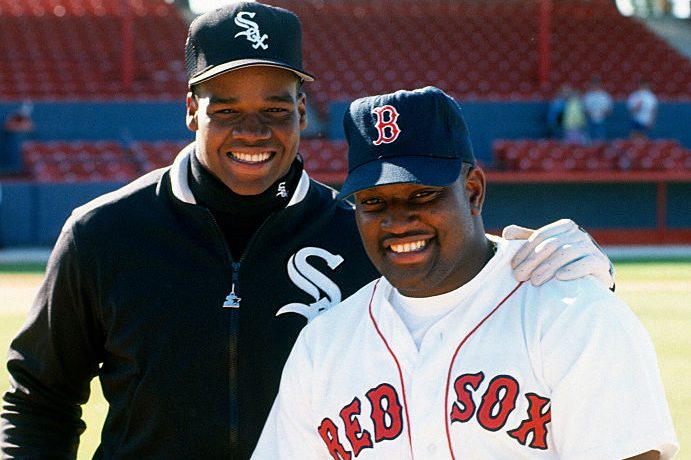 Mo Vaughn and Frank Thomas in 1996. (Focus on Sport/Getty)

Before they were competing against each other on the baseball diamonds of Major League Baseball, the pair faced off in the NCAA regionals as college freshmen, “The Big Hurt” Thomas at Auburn and “Hit Dog” Vaughn at Seton Hall. Not long after, the two faced off once again when they were both playing in the famed Cape Cod League when Vaughn’s Wareham team defeated Thomas’ Orleans squad two games to one in the league championship series.

The competition only continued in the majors with Thomas winning back-to-back MVPs with the White Sox in 1993 and ’94 and Vaughn denying him a three-peat by winning it with the Red Sox in 1995.

Thomas and Vaughn had a rivalry, but it was a friendly one that led to plenty of “motivated” chats at first base between the two All-Stars.